Getting Split-Tunneling in Linux to work 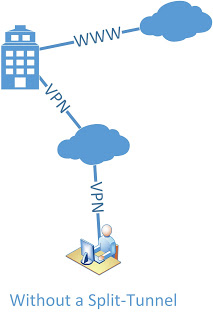 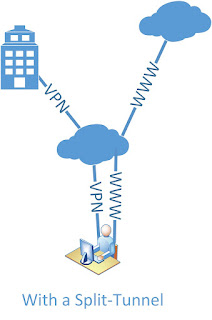 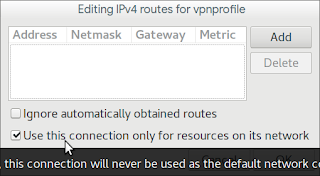 The route table should look like this. Note the default traffic is still going through eth0 as per the table.

0.0.0.0 is the default route, any route which is not matching will end up in this route and go through it.
There may be some extra routes added by the vpn client, so you can keep them. Some VPN servers push the routes from the VPN server so as to make sure the particular range of IP traffic always go through the particular route.

Integrate custom script into the system default behavior whenever a vpn client connection is established and terminated.
Let’s assume you have created a vpnscript.
$HOME/bin/vpnscript.sh


Make the vpnscript functional. You can also copy these scripts to a permanent place. Change $HOME to an absolute path..

dns.vpn.ip could be your vpn dns server, this would also be populated into /etc/resolv.conf once vpn is connected. You can also use two dns servers in this order to make sure if the dns lookup fails in the public server then the VPN dns server is tried for lookup.
Public/Default DNS server
VPN DNS server

Manually enter the hosts entries which are contacted frequently. This may not be required if you are only using DNS server approach.


Woof!! That is a lot of networking system but not too much for a networking expert.
Now take a pause and lets understand before moving forward.

Scenario 1:
You want to surf https://www.wikipedia.org
The public dns server will resolve your dns query to a public IP and the internet traffic goes via eth0

After the IP is resolved to 10.12.20.23, the system will check if there a specific route in the routing table. If it is there then it will go through that interface, otherwise the ssh will try to connect it through default route which is eth0.
If it fails then you have to add the route manually like this.

Seamless browsing in Firefox/Chrome without worrying about the data traffic. This will also work if your VPN provider has http proxy. In my case I will use socks5 proxy.
Socks5 proxy using ssh
Posted by Piyush at 9:34 AM